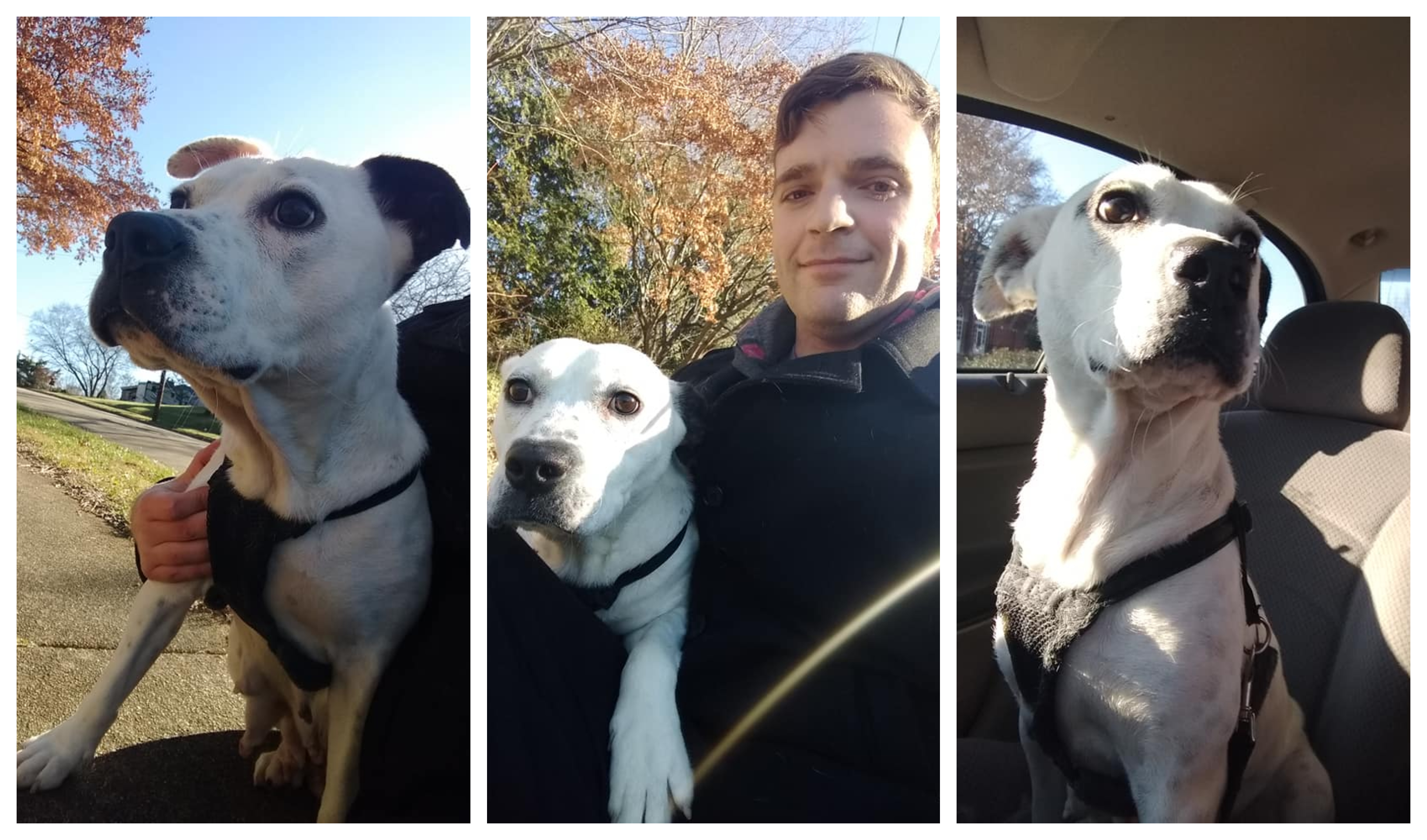 My friend Rebekah adopted her in winter.

That's all it took for this shelter dog to become their top choice.

Gabby is a force of nature to be reckoned with, as you'll soon discover.

A Sweet Mama with Trust Issues

"Gabby was pregnant when she came to the shelter and her reactions to humans who aren’t family indicate that she was probably abused badly."

Gabby's trust isn't a given.

It takes time and effort to earn it.

After many meals and treats, she's coming around.

Don't expect a new dog to place their faith in you immediately.

If you've ever been hurt in a relationship, you know how hard it is to trust somebody new.

Dogs are no different. They might have bad memories and trauma to work through. Be patient with them.

"Gabby’s best quirk (which should really go under Issues, because it’s pretty stressful) is the totally unforeseen vendetta against running water."

Gabby has an important mission.

Destroy running water and anything containing it.

According to Rebekah, garden hoses didn't stand a chance.

They were quickly chewed up and can no longer be kept in the yard.

Putting them in boxes or containers didn't help. Gabby can sniff out the enemy anywhere.

Later, Gabby got a pool to play in, which her owners hoped would distract her from the warpath.

It didn't work. She flipped the pool, dumped the water out, and ripped the structure into tiny pieces.

Downspouts -- the architectural features that filter rainwater from the roof of your house -- aren't safe either.

After tearing them apart, Gabby would dig frantically to catch the remaining water, and become a mud monster in the process.

Moral of the story: just like people, shelter dogs have quirks and eccentricities. You'll twist your mind into knots trying to understand them.

What did water do to warrant such disrespect from Gabby? There's no telling. And while this behavior trait is inconvenient, it also makes for a great story.

Making Sense of a New World

"Gabby'd never seen the inside of a house and had no idea how to Dog."

Gabby was nervous as heck.

She didn't know humans could be a source of affection.

It was rare for her to approach anybody in the home for pets or ear scratches.

Most of the time, she stayed in her crate, which became a safe space (and was also used for housetraining).

Today Gabby is a completely different dog. She spends half the night sneaking into bed so she can snuggle with a big human.

They put an ottoman next to the bed for Gabby. She'll lay and wait for Rebekah's husband to fall asleep. Then she curls up against him.

If you adopt a dog and they seem cold or distant, don't read too much into it. They probably just need time to settle and get comfortable with you.

Is It a Dog Toy or Human Object?

Talking to Rebekah made me wonder...

How do dogs tell the difference between a toy and human object?

I have no idea. But this side of Gabby helped me understand why so many dogs are chewers.

Gabby's owners got her a dog bed, but it didn't last long. She shredded it while they were gone for an errand.

They have to be careful about what items are available. If left alone, Gabby explores the question of: "What might be a dog toy?"

She decided brooms are. Rebekah once returned to find Gabby swinging a broom by its bristles, while the handle knocked things off their shelves.

Why Adopting the Dog Was Worth All The Trouble

"Gabby is good company, a good cuddler, and she always likes affection."

Rebekah's daughter has reached the stage where parents become lame.

This is a difficult transition for any mom or dad, who miss when hugs and kisses didn't feel "uncool."

Adopting Gabby and her kennel mate, Thorin, has made the process easier. The dogs will never stop loving physical touch.

Gabby's owners are also constantly amused by her antics. There's no denying she can be a pain in the butt, but this is outweighed by the entertainment value.

I asked Rebekah to share her best advice for folks who are exploring the possibility of adopting a dog. She suggests serving as a foster at first.

If there are any deal breakers in the dog's behavior, you can return them, and won't feel as guilty. At least the dog got a vacation.

I hope the story of Gabby moved you.