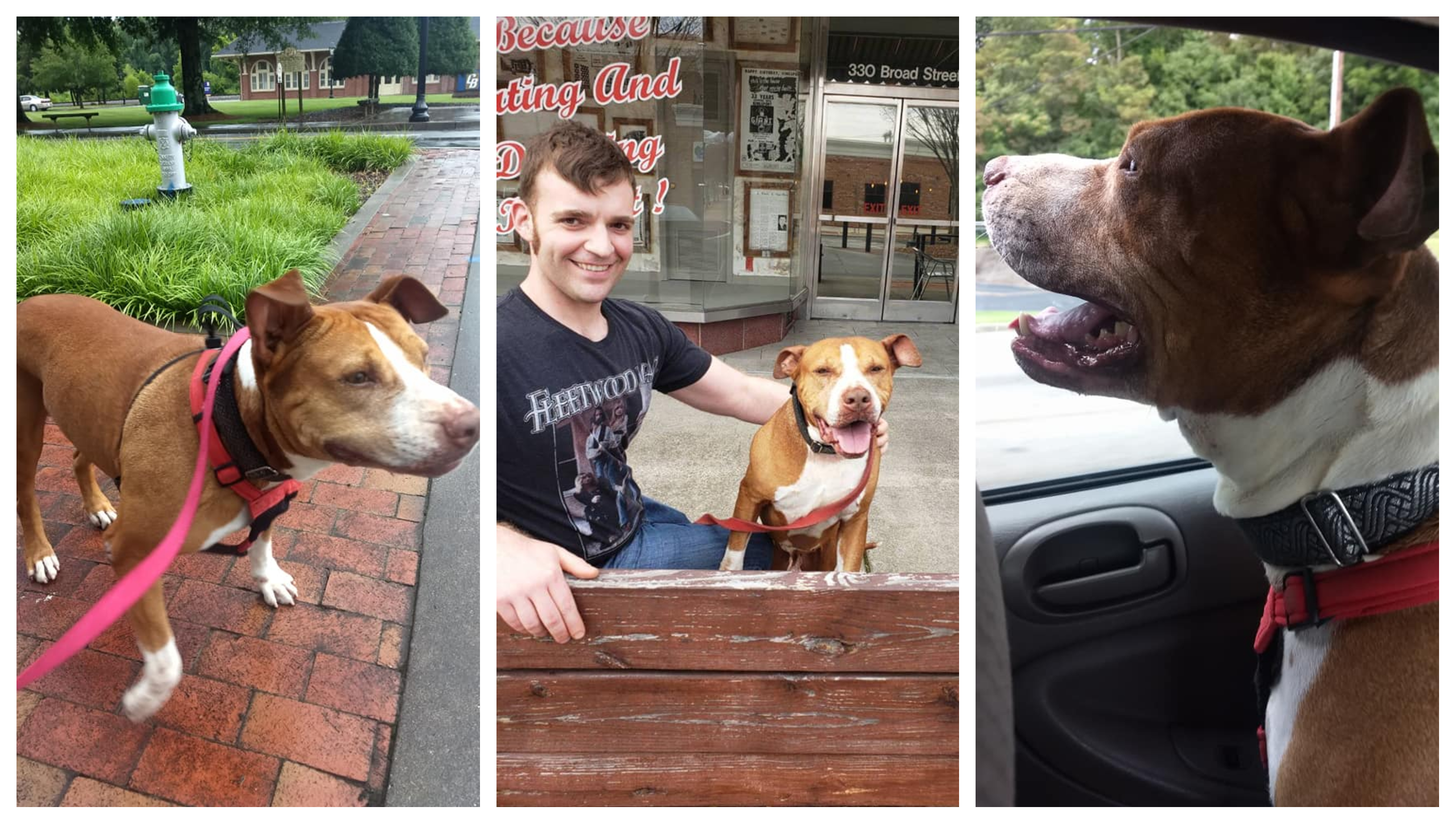 My friend Brady Duff adopted him about a year ago.

I've walked Tank many times and can confirm he's an expressive dog.

Tank serves as a great case study to demonstrate why pit bulls deserve a fair chance.

A Lap Dog in Disguise

"When I got the lead to put back on him, he hopped in Missi's lap as if to say: 'Don't let him take me back inside there!' He is so big and strong, but was so scared to go back in the shelter."

Pit bulls are more jacked than many bodybuilders.

Despite their strength and size, they often act like big babies.

He was the longest resident for a while, which broke everybody's hearts.

Volunteers and staff members loved Tank. Most called him their favorite shelter dog.

Brady and his wife Missy fell in love with Tank at first sight. But they weren't ready to adopt a pet yet.

They'd recently put down a former dog, which is a sad process for any pet owner, and they needed time to heal.

A few months later, Friendship Ford began a partnership with Petworks. They kept adoptable shelter dogs in their lobby.

Tank was the first to go. The Duff's saw a Facebook status update about the arrangement and visited Tank. This time, he got adopted.

The Most Misunderstood Dog Breed

"People need to give pit bulls a chance. They're loyal and loving dogs. They get a very bad rap and are highly misrepresented in the general public and media."

Ever seen a scary sounding news story about how pit bulls are dangerous?

I have. And it never fails to tick me off. The science doesn't support this sentiment.

According to dog bite statistics, you're more likely to get bitten by a chihuahua than a pit.

People also fail to notice a key word: reported dog bites. Most dog bites are reported to no one.

Pit bulls are one of the strongest dog breeds. If they bite, reports are filed. If a small dog bites, nobody cares.

According to Brady, Tank hates cats. And he'll chase rabbits, squirrels, raccoons, or any other small critter in the woods.

But this behavior isn't exclusive to pit bulls. I had a beagle named Dixie. She was aggressive as heck. Any animal was fair game.

When you see someone call pit bulls "monsters" on social media, I can almost guarantee that person hasn't spent any time with a pit bull.

Living and Loving Life with Every Breath

"He is a great shotgun riding buddy. I can get his leash or harness and he goes absolutely crazy to go and see and smell the world."

I can confirm this quote is true.

Tank loved to explore his surroundings.

He'd sniff every single tree and trash can we passed.

But he was also content to sit down and snuggle with his human.

One time, we went downtown, and our walk was interrupted by a heavy rain.

We found an awning to hide under. If you're local, it's the one in front of Wallace News, which sadly closed.

Tank understood we had to stay still or get soaked. So he squeezed his body against me to bask in pets and scratches.

No Chocolate Left Behind

"When we came home, Tank had eaten an entire bag of cheap chocolates. When we got to him, he was bug-eyed like he was on crack and looking wild."

The whole family went out for dinner to celebrate.

They returned to discover a hyper dog and empty candy wrapper.

Tank sprinted straight for the fence and slid underneath like a baseball player stealing a base.

It took 45 minutes to find him. And he looked intense. Luckily, Tank hopped on the back of their truck like he always does.

On another occasion, Tank ate the lock attached to his crate. And he suffers from separation anxiety. Otherwise, he's well-behaved and easy to mange.

Why Adopting the Dog Was Totally Worth It

"He gives love even when you might not think you want it or deserve it. And he knows when Missi feels bad and won't leave her side. He is a great snuggle buddy and Netflix watching partner."

Tank's proved to be a comforting and supportive presence in his new home.

He can tell when his owners are having a rough day and does his best to soothe them.

The thing that impresses me the most about dogs? Their supercharged levels of empathy and intuition.

It's incredible how they can take one look at their human and know they feel bad. This is exactly why dogs are angels in disguise.

I hope you enjoyed the tale of Tank.